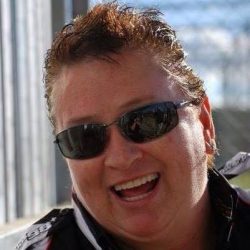 Joanie Lewis has had a love and compassion for wildlife from as far back as her memory can take her. Having formed a close relationship with magpies that would come and frequent her place daily for feedings and playtime for many years, the sudden death of one of her magpies lead her to the Currumbin wildlife hospital where she enquired about becoming a carer for magpies. As Fate would put it, that first magpie workshop that she attended was run by the president of Bats Qld, she had always had a love for the flying foxes and so approached Bats Qld to find out how to start, the rest was history. Joanie’s passion for these beautiful mammals has not only stolen her heart but has changed her life in such a way that they have become the centre of her life and is constantly talking and educating people that come into her life on a daily basis, their welfare and existence is of the utmost importance to her, and getting that message out there to educate and to rescue and rehabilitate has a stronger passion for her than anything else. Joanie has spent a majority of her life working in male-dominated roles, a bit of a Jill of all trades but mistress of none, working any type of work from Rural Firefighting and rescue, search and rescue at the SEC, Circuit and gym instructor to cleaner for government departments, but the most important and most rewarding role she has ever done is become a bat carer and being involved in bats qld and experiencing the stages from orphans, to release and also rescue and rehabilitation!! It is one of the most beautiful experiences she has ever had in her life, it has fulfilled her in ways that just can’t be explained in words, she just wishes she had discovered this a long time ago when younger as to have had a lot more years in her life to give to these gorgeous Bats.